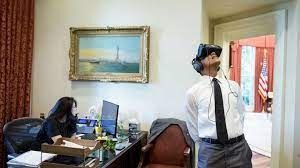 Over the course of his presidential career Obama was a great president, but not many people knew he was a great gamer. He was so good at VR games that the officials gave him a 30 minute break every Sunday to wander around the house playing VR. At times he even played job simulator to represent his work. Even his body guards enjoyed his cleverness at VR. They replied earlier this year to Obama to ask how his gaming is going.

"He was such a good gamer, but the problem was his wandering around the house n the process. My bud and I had to prevent him from wandering into the kitchen, his desk and even the stair case. He was a good guy," one of his old body guards replied